Forget J.K. Rowling, Sally Rooney and David Walliams, there is a new publishing phenomenon in town.

Alice Oseman, 27, has sold nearly a million pounds worth of books every month — and is on course to pocket £60 million globally — in 2022 alone.

The secret to the author’s staggering success? The Heartstopper series, which started life as a crowd-funded, self-published graphic novel for teens, about a shy 15-year-old boy called Charlie who falls in love with a rugby- playing lad in his class called Nick.

The books were already a big hit with young adults but, after being adapted for TV by Netflix, have gone from cult status to global brand.

Alice Oseman, 27, has sold nearly a million pounds worth of books every month — and is on course to pocket £60 million globally — in 2022 alone.

The Netflix show, simply called Heartstopper, launched in April, and stars a clutch of teenagers, most of whom are in their first acting jobs.

Despite this, it has made it to the streaming giant’s Top 10 in more than 50 countries and two more series have been commissioned, with the second going into production later this year. Unusually, Oseman adapted her own novels for the screen.

Buoyed by the show, sales of the graphic novels (and even the colouring book) have gone through the roof. The Heartstopper series alone has sold more than 4 million copies worldwide and is a Top 10 bestseller in 10 markets including the U.S. — with publishing rights secured in 33 countries to date.

She looks set to earn more than £10 million domestically; and the popularity abroad, particularly in America, suggests she could make as much as £60 million worldwide. 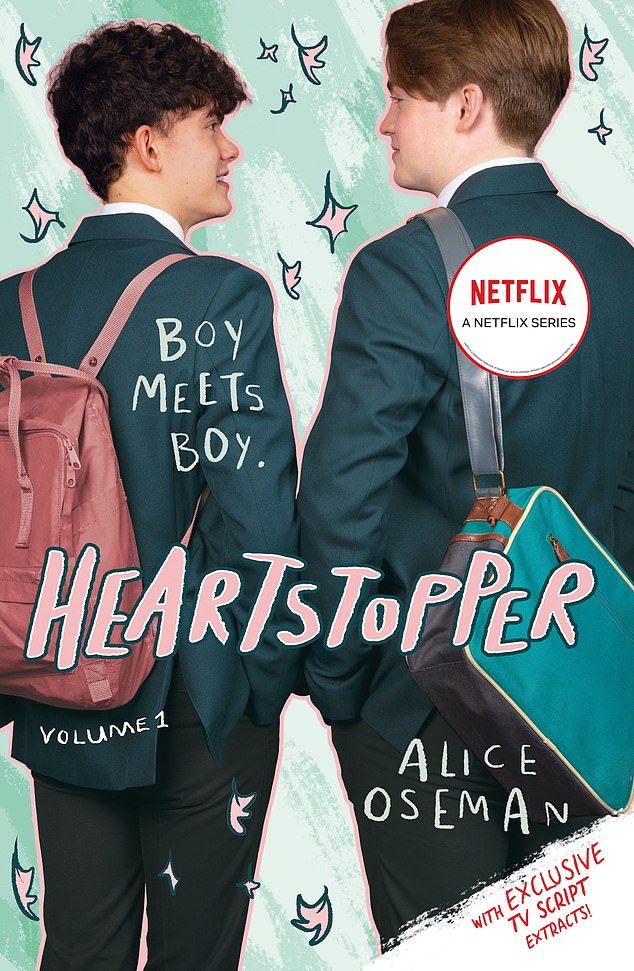 The Netflix show, simply called Heartstopper, launched in April, and stars a clutch of teenagers, most of whom are in their first acting jobs

Critics rave about the wholesome and emotional impact of the uplifting books, which tell the story of sweet, awkward first love and are set in a school modelled on Rochester Grammar, which the author attended.

Oseman wrote the first of the series in 2016, though its heroes Charlie and Nick appeared in an earlier book, Solitaire (which earned her a publishing deal at 17 and drew comparisons with The Catcher In The Rye).

Charlie has already come out as gay, but is enduring homophobia.

Oseman said: ‘I do believe things have improved, even since I started writing Heartstopper; but definitely since I was in school myself. There’s still a lot of homophobia, transphobia, and bullying out there, though; so I’m sure some people will relate.’ 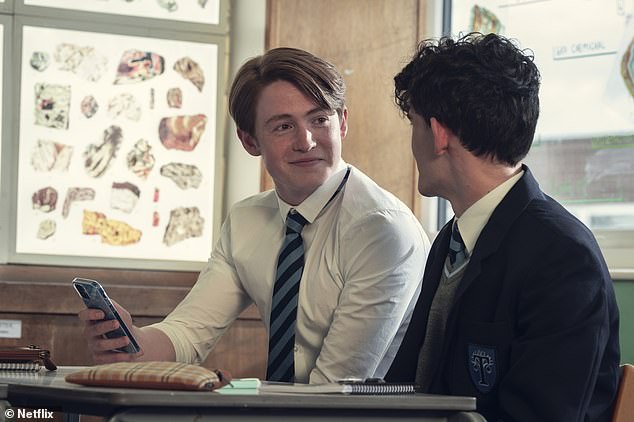 Critics rave about the wholesome and emotional impact of the uplifting books, which tell the story of sweet, awkward first love and are set in a school modelled on Rochester Grammar, which the author attended

Heartstopper started out as a free- to-read webcomic in 2016. In 2017, she crowd-funded a self-published edition, raising £58,000 and mailed the first 2,000 books out herself. Her books are now published by Hachette and HarperCollins.

In 2020, Oseman released novel Loveless, about sexual identity. She told an interviewer: ‘It explores asexuality and aromanticism — which is what I am. I’m an asexual aromantic. It was kind of a coming-out journey, a deep dive into something that had affected me throughout my life.’

She is believed to have completed the Heartstopper series — eight books — and is considering moving on from teen fiction to the adult market.

Why Lesley prefers rags to riches…

Lesley Manville says it was easier playing Ada, a cleaning woman, than portraying Princess Margaret in The Crown.

Manville takes the title role in the heartwarming film Mrs Harris Goes To Paris, an adaptation of the beloved 1958 Paul Gallico novel.

Manville, 66, said: ‘It is in my bones. That was the life I knew, because I had working-class parents. It’s been more of a stretch when I’m playing someone like Princess Margaret, because I had no knowledge of that life.’

The film, out here next month, tells the story of widowed Ada, a hard-working housekeeper who decides she wants to spend her life savings on a Dior dress, after seeing one being worn by a wealthy client.

She scrimps and saves (and gambles at the dog track) to raise enough money and finally arrives at Dior’s Avenue Montaigne headquarters, where she charms everyone. 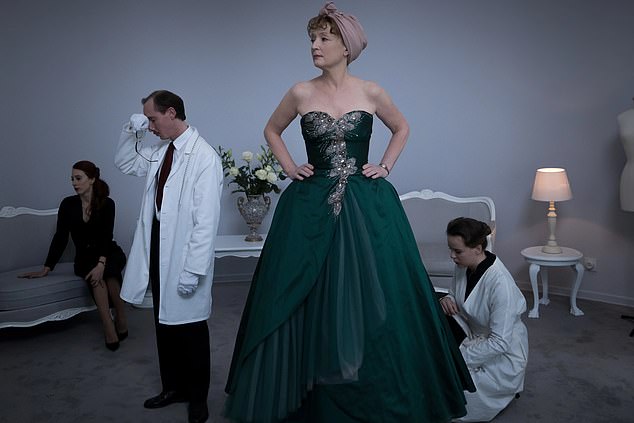 Lesley Manville says it was easier playing Ada, a cleaning woman, than portraying Princess Margaret in The Crown

The fairy tale is complete when she moves to Paris and starts making some changes — for the better — at the fashion house.

Manville reflects: ‘I didn’t know the book at all. It came to me as an offer, so it was nice to read it, knowing it was mine if I wanted it.’

Manville got on so well with co-star Isabelle Huppert that the pair are now thinking about doing a play together. Manville said: ‘She’s got such style, which appeals to me, because we both love clothes.’

She admitted she ad-libbed various lines in the film, including exclaiming ‘Gordon Bennett!’ and observing that things had gone ‘t**s up’ — both of which may prove slightly puzzling for international audiences.

An intriguing dinner in Mayfair, London, last week with Tom Cruise joining Jeff Bezos, Amazon’s former CEO, and his girlfriend Lauren Sanchez. Cruise, famously, is on a mission to save films from the threat streaming poses to the cinema experience.

Bezos, meanwhile, remains a major shareholder in Amazon, which offers exactly that, via Prime Video. Might Bezos be softening Cruise up for a project with its film division? He’d need a lot of charm to pull that one off.

More likely is the two men have a connection via personal trainer Wesley Okerson, tasked with making Bezos buff — and who used to work with Cruise.

Dame Maureen Lipman thinks the Queen should be nominated for an acting gong, after her star turn opposite Paddington Bear, complete with marmalade sandwich, in a short film shot for the Platinum Jubilee celebrations.

‘I’m going to put forward to BAFTA that the Queen should get the best newcomer prize, for best appearance in a short film,’ Lipman joked. Though she conceded that giving her a best newcomer award was like ‘giving Dolly Parton a trainer bra’.

Kylie Minogue’s return to Ramsay Street for the last ever episode of Neighbours — sporting a throwback denim boiler suit and retro curls — is one of the great TV moments of the year. 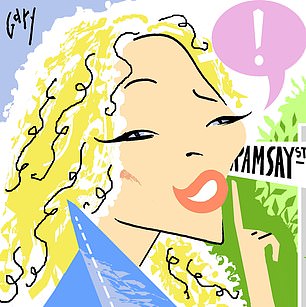 But there has been much speculation on social media as to why she kept so tight-lipped, only uttering: ‘Home sweet home’!

However, I’m told the problem was a lack of time.

A friend said: ‘There was only one half-day where Kylie and Jason’s schedules aligned. They would have loved to film scenes with Guy Pearce, too, but this wasn’t possible.

‘For Kylie and Jason it was less about a storyline — which would have been hard, given the complexities of the final episode — but just to be in the street, and for viewers to see the love still between them. It was very emotional for Kylie to be back on set. She loved being a part of the finale.’

Clooney to take on the Krays?

Is George Clooney planning to make a film about notorious London gangsters Ronnie and Reggie Kray?

The double Oscar winner is currently on holiday in Italy with his wife Amal and their five-year-old twins, having wrapped up production on The Boys In The Boat, a movie about a U.S. rowing team.

However, I understand he and long-time producer friend Grant Heslov are considering the possibility of making a film about the gangster twins (pictured).

Heslov was spotted on the set of The Boys In The Boat with a copy of Ron Kray’s My Story, ghost written by TV legend Fred Dinenage, poking out of his pocket. 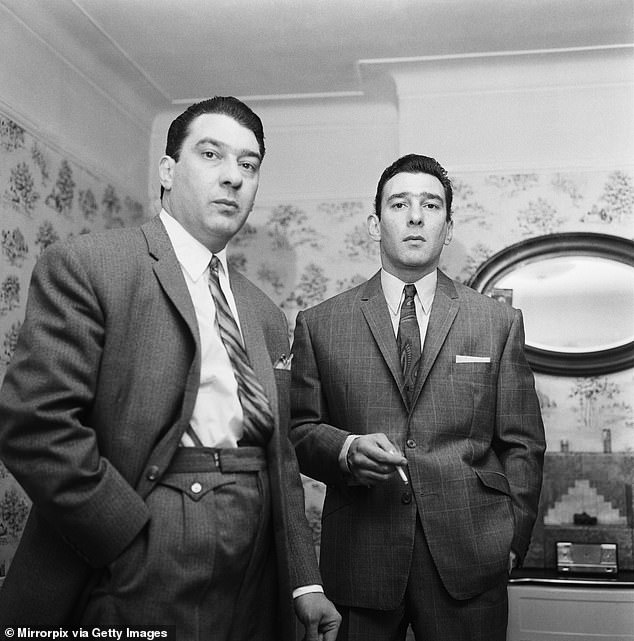 Is George Clooney planning to make a film about notorious London gangsters Ronnie and Reggie Kray?

The book was published two years before Ronnie died and, in it, he talks at length about his bisexuality and mental health issues, as well as his faith (he found God while in Broadmoor), and how he engaged in telepathic communication with brother Reggie, who was incarcerated in Lewes.

Since 2006, Heslov and Clooney have run Smokehouse Pictures which has made films including Good Night, And Good Luck, Argo and Ocean’s 8.

The Krays have made it to the big screen before. Tom Hardy played both twins in the film Legend in 2015; and Gary and Martin Kemp were in the 1990 film The Krays.

Dinenage, now 80, tells me that the rights to the book have not yet been bought by Clooney, but he would be delighted if it came to pass.

He adds: ‘I’d be happy to make a cameo appearance.’

Maigret may make a return — put that in your pipe and smoke it!

Rowan Atkinson has been reflecting on TV drama Maigret, a rare disappointment in an otherwise glittering career. The show was dumped by ITV after just four episodes.

‘It wasn’t my decision to pull the plug,’ Atkinson said of the demise of the pipe-smoking detective.

‘That was down to ITV, who made some kind of judgment about what kind of shows they wanted to make and I guess how well — or not — our show was going down. It was their prerogative; and it’s not for me to raise any defence against that decision. But never say never. I wouldn’t rule out filming more.’

Atkinson played Chief Inspector Jules Maigret in the whodunnit set in mid-1950s France. It was launched over Christmas 2016, but disappeared from our screens less than a year later.

The show was based on the books by Georges Simenon, published between 1931 and 1972. 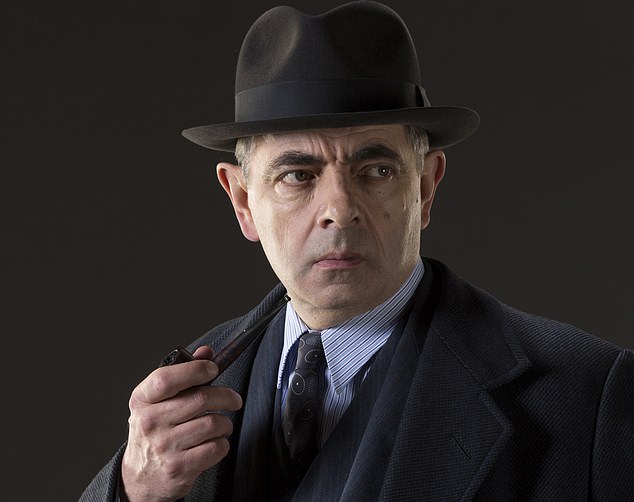 Rowan Atkinson has been reflecting on TV drama Maigret, a rare disappointment in an otherwise glittering career. The show was dumped by ITV after just four episodes

Harry’s covering up for his bedroom scenes

Harry Styles is a handsome and debonair leading man in the film Don’t Worry Darling. However, it took an enormous amount of work to prepare him for the frank love scenes with screen wife Florence Pugh (both pictured, above) — because he has so many tattoos.

The former One Direction star, who now has a huge career as a solo musical artist, has 60 of them: covering his arms, legs and torso.

Make-up artists first had to colour-correct each design, sponging red pigment over the black. Then they were covered in green pigment, followed by powder to seal. Finally, a cream foundation was applied, to cover them. The whole process took around three hours.

Jason Collins is credited with special make-up effects on the film — he is also the man who supervised Lily James’s transformation into Pamela Anderson for Pam & Tommy, using prosthetics and cosmetics.

Don’t Worry Darling, directed by Styles’s girlfriend Olivia Wilde, is set in the 1950s, in a suburban Utopia where the men work on the ‘Victory Project’ and their wives don’t ask too many questions about what, exactly, that is.

It will premiere at the Venice Film Festival later this month.

Harry Styles is a handsome and debonair leading man in the film Don’t Worry Darling. However, it took an enormous amount of work to prepare him for the frank love scenes with screen wife Florence Pugh (both pictured, above) — because he has so many tattoos